Joanne Ungar lives in New York City and is represented by the Front Room Gallery in  New York City. She is a visual artist who makes poured wax artwork.

This is her #artinthetimeofcorona story. 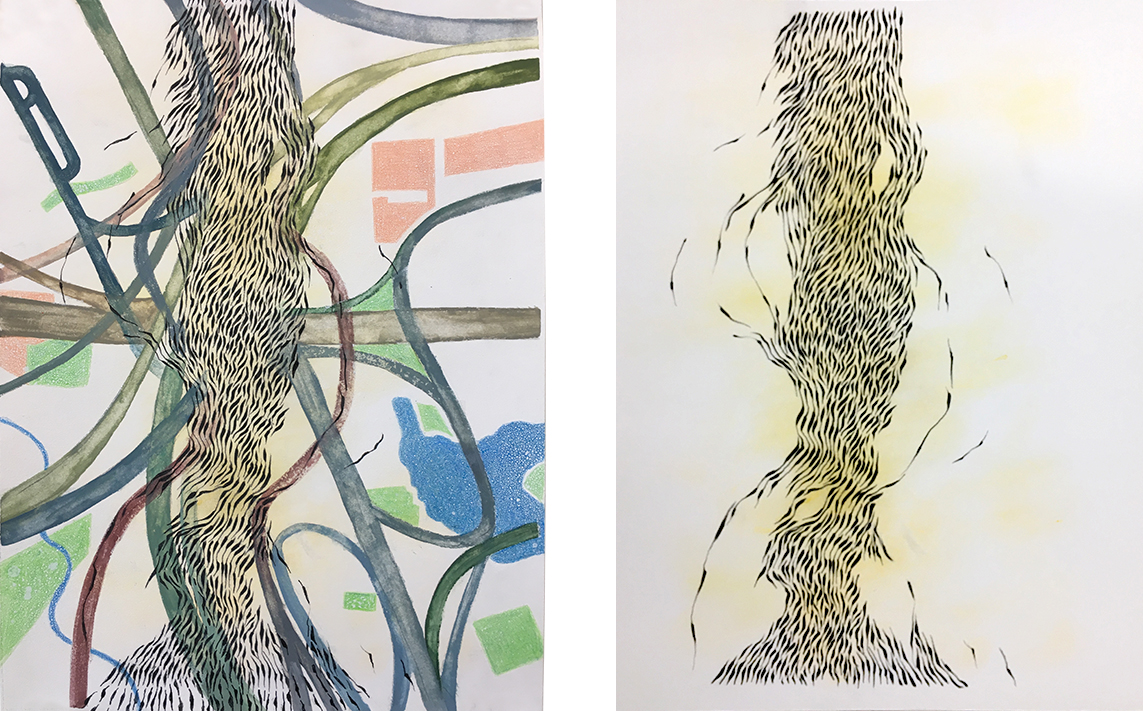 Mindy Dubin, started it as a charcoal drawing (on the right), and I finished it (left).

How was New York City affected by the COVID-19 virus? How have you been affected personally?

I’m going to paraphrase from wikipedia: NYC was the worst-affected area in the country in March.  By April, the city had more confirmed coronavirus cases than China, the U.K., or Iran, and by May, had more cases than any country other than the United States. By April, hundreds of thousands of New Yorkers were out of work with lost tax revenues estimated to run to approximately 10 billion dollars.

I have freelanced part time in the video-post-production industry in order to support my art career for over twenty years. This year I’ve been out of work since mid-March, and I don’t expect to work again until July or August at the earliest. That’s a rough year! But I feel lucky to have stayed healthy during this time, and I’m doubly lucky that I have enough savings to get me through the economic drought. I only just started leaving my apartment to travel to my actual art studio for art-making two weeks ago, in early June. For most of March-May I used a temporary home-studio in a corner of my small apartment where I made little paintings and collages. It was a radical change for me in all ways: size of work, 24/7 access, materials, and ideas.

My friend Christina Massey started a pandemic project in April with the two pronged idea of keeping isolated artists connected AND supporting the ailing United States Postal Service (USPS). It’s called @uspsartproject, and basically, 2 artists each create ½ of a work, and then they mail them to each other for completion. I’ve been steadily doing this with multiple artists during my home studio time and now at my art studio. It’s been refreshing and exciting. When it’s all over, I’ll have done 10-15 collaborations, each one producing 2 works of art. It feels great to experiment and try new ideas and new materials all while having a visual dialog with another artist.  The image I’m showing above is one of these collaborations. Mindy Dubin, who is a compatriot video artisan as well as an accomplished fine artist, started it as a charcoal drawing (on the right), and I finished it (left).  There will be a traveling physical show of the @uspsartproject results beginning in August. More information can be found on the Pelham Art Center site.

I am lucky to have a husband who cooks!  I’ve been baking a little bit. I like to knit — it helps to keep me calm, so I’ve made big progress on my knitting project. But like most artists, I’m accustomed to being alone and being quiet, so lockdown didn’t feel completely horrible to me. I feel bad for my extroverted friends!

Now that I’m back at the art studio, the traveling to and from via bicycle is a steady and exhausting routine. (Formerly I took public transportation to get to my studio). I like to grumble about it, but I know it’s actually very beneficial, both for the body and the head.

Absolutely. I am represented by the Front Room Gallery in NYC. They have temporarily closed their physical gallery but are reopening in July.  While the gallery has been closed, they created and have maintained a robust online program.  They have also held a weekly zoom meeting for their artists which has been great. It keeps us all from feeling lost and alone in the art world. We discuss online shows and ideas that might work as well as what’s happening in the larger world and to each of us individually.  Artists can share tips about social media and share what they’ve got going on outside of the gallery. I’ve been very impressed and inspired. I’m proud to be a member of this gallery.

I wish I had a crystal ball so I could tell you how the world is going to be changed. For myself, personally, I don’t think much will change. I will continue to make art as best I can, as I always have. My gallerists are valiantly figuring out how to keep up with the changes from their end, and I’m grateful to them for that.